How to save City College


I’m not sure San Francisco – what with the BART strike and the holiday – has quite had a chance to come to terms with the magnitude of what the accreditingcommission overseeing City College has done to us.

This unelected, unaccountable body has shattered one of the most important public institutions in the city, damaging the economy, the workforce, and the hopes of tens of thousands of students. And it’s done so for the worst possible reasons.

I’m not going to argue that the administration of City College is perfect, or that the school hasn’t been plagued over the years by sometimes criminal misconduct (and by some very incompetent majorities on the Community College Board). The board’s better these days, but there’s a lot of mess to clean up.

Still, in my mind, the heart of what accreditation is about is ensuring that an institution is providing valuable, credible education – that a degree from the school means something. It’s a way for employers and other institutions to have faith that City College graduates know enough about their chosen fields that they are prepared to enter a four-year school or the workforce.

And nowhere in the long, critical, accreditation report is the value of a City College education ever seriously questioned.

Four-year schools accept City College graduates – and I’ve seen no evidence anywhere that Cal or State find those students unprepared. (In fact, I’ve had a lot of interns from the journalism program at City, and I can tell you that they’re as well trained as the students from State, sometimes better.) Health-care institutions hire people with nursing and other training, and consider City College degrees a valid indication that their employees will know what they need to do the job. Same for employers around the city.

So what did the ACCJC complain about? Administration. How decisions were made. Lack of centralized accountability. All valid points – but in the end, they don’t speak to the central question: Is a City College degree valid? By any reasonable account, yes.

Question asked and answered. Decision simple. If you’re an accreditor, you push for all the administrative changes you think are needed (most of which, by the way, City College has given them) but you renew accreditation because the quality of the education in the classroom is good enough to merit it.

That’s not what happened.

There may still be some form of salvation. What the ACCJC really wants, apparently, is for City College to eliminate much of  its traditional mission and become a simple junior college, aiming at moving High School graduates through a two-year program and into a four-year college. In the end, “saving” City College might mean cutting it back to, say, 10,000 students, eliminating all of the centers and campuses outside of  Phelan Avenue, and wiping out the opportunities that the school offers to immigrants who want to learn English, seniors who want to learn and stay active, people who aren’t going to a four-year college but need job training, and everyone else outside of a narrow demographic group.

“It would be a dramatic downsizing,” City College Trustee Rafael Mandelman told me. “And that will be called a victory.”

Which would be a disaster for San Francisco.

What would happen to all the public buildings that the taxpayers have funded? Well, they’d be sold off – most likely to private institutions like the Academy of Art University or the University of Phoenix or Heald, or the California Culinary Academy, where students could learn trade skills – for maybe $30,000 a year – and graduate heavily in debt. We’re taking about the privatization of basic education in San Francisco.

What happens to the $15 million a year that the voters approved for City College under Prop. A? That can’t go to private schools (or, for that matter, to the San Mateo college district, if it chose to take over CCSF).

What happens to the tens of thousands of people who need low-cost English as a Second Language classes to survive in this city? Where are the immigrants going to go?

Why are we allowing this to happen to us?

Well, for one thing, we don’t have a lot of choice. The ACCJC operates under federal Department of Education sanction, but there is no way to appeal its decision to the feds. The only “appeal” is to ask the same commission for a rehearing. Yes, the feds can revoke ACCJC’s charter – and the California Federation of Teachers is pushing for such a move – but even that wouldn’t give City College back its accreditation.
It’s such a bizarre system. There’s nobody accountable to the public involved at any level. The commission doesn’t seek or care about public input. And now the state chancellor will appoint a trustee (probably the same person the elected College Board already hired) who will be able to act without any public comment or oversight. He could, for example, start selling of City College property. And nobody would be able to stop him.

The College Board has been trying so hard – too hard, it seems now – to work with the accreditors and the state, to go along with unpleasant and often wrongheaded changes in the hope that everyone was acting in good faith. That was clearly a mistake; the board did pretty much everything it was asked to do – and still got completely screwed.

“If anything, we’ve been too accommodating,” Mandelman said.

So now it’s time for the city to step up. So far, the mayor has been awfully weak, siding with the state and never indicating that the accreditation commission did a terrible, unprofessional, and unjustifiable thing. It’s tough, because the supervisors, the state Legislature, even Congress is powerless to stop this fiasco. But at the very least, we need some outrage. We need the city family to make it clear that this decision can’t stand.

The ACCJC needs to know that it’s not just CFT pushing the folks in Washington to investigate – every city official and elected leader ought to be in on that complaint. Rep. Nancy Pelosi should be calling the Department of Education to make sure that proper steps are taken.

And somebody needs to file a lawsuit.

Only a judge can find the accreditation report biased and invalid. It’s not clear who would be able to sue (City College as an institution could, but that won’t happen now). An individual trustee could – if we could raise the money and find a lawyer who wants to help. Could the teachers’ union sue? Maybe.

Here’s another thought: Can the city attorney sue, alleging that the shutdown of City College would bring irreparable damage to the City and County of San Francisco? That’s an easy claim to make; I don’t know if the courts would give Dennis Herrera standing (or if the mayor or the supervisors would go along) but we ought to be looking at it. (Hardly anyone’s working at City Hall today, so it’s hard to get answers, but I’ll let you know as soon as I do.)
The BART strike and the America’s Cup have pushed this out of the headlines for the moment, but the emergency is still there. The damage is imminent. And we can’t just sit here and take it.
Posted by Unknown at 3:25 PM 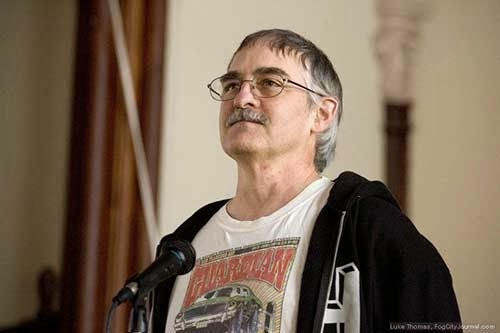